Confession time: While I like to rationalize my blog’s recent silence with changing jobs and moving to a new city, the truth is, the single biggest drain on my free time lately has been Supercell’s Clash of Clans.  While this apparently puts me in good company, I decided it’s about time I shared what I’ve learned about how this “free” game apparently manages to spin well over $500,000 a day for its creator Supercell.  (Update: Forbes reports Supercell now earns over $2.4m a day, the majority of that from Clash of Clans.)

The core of Clash of Clans is a bog-standard resource management game: mine “gold” and “elixir”, use gold and elixir to buy improvements to your town so you can build stronger armies, raid other players in order to loot their gold and elixir, rinse and repeat.  If you’ve ever played Starcraft, Age of Empires or pretty much any other real-time strategy game, you’ll know the drill, and the buildings and units come off as almost painfully derivative.  There’s a Barracks for new troops and Archer Towers for defense, you’ve got Zerg-like cheap and disposable Barbarians, weak but ranged Archers, slow Giant tanks for soaking up damage, etc.  But formulas are formulas because they work, and it’s fun to set up your little village, win your first battles and watch your (thoroughly meaningless) levels and experience points rack up.  The touch-screen interface is a pleasure to use and the smoothly zoomable 3D graphics are beautifully animated with cute little touches; for example, when you tap to select an army camp, every unit salutes their leader in a different way.

Show Me the Gems

“So that’s all well and good”, I hear you say, “but where’s the money coming from?”

In the standard Zynga playbook for making money off with freemium games, you would let players buy gold, elixir or the items they want directly.  But Clash of Clans adds a twist: you can’t buy anything directly, but you can buy a third resource called “gems”.   Unlike gold and elixir, gems are not necessary for building anything functional, they’re simply a type of “power-up” that serve as a shortcut.  Need more gold to finish a building? Buy it with gems.  Need more elixir to add a dragon to your army?  Buy it with gems.  Don’t want to wait a week for a building to finish?  Complete it instantly with gems.  In other words, gems mean instant satisfaction.  What’s more, their cost is neatly obfuscated: purchased gems come in big, oddly numbered stashes (500, 1200, 2500, 6500, 14000), and once you have the pile sitting in your account, it’s easier to whittle it away 834 gems at time, whereas you’d probably think twice if asked to punch in your credit card details and confirm that you really want to pay $6.98 (just a sliver under the U.S. federal minimum wage) to upgrade your Wizard Tower.

Yet this formula’s beauty is that none of this is immediately apparent.  You start the game with 500 gems, which is plenty for the initial stages, and there are many easily earned “achievements” that reward you with more, so that you don’t initially appreciate their value.  The initial buildings are fast to build, with some building instantly and others taking a minute here or five minutes there.  And you’re shielded from enemy attacks for three days, so you can take your time building up your base and raiding the AI’s goblin bases for easy loot.

As you advance through the levels, though, the time and expense of everything ramps up exponentially.  A level 2 Town Hall takes 5 minutes to build and costs 1,000 gold; a level 8 Town Hall takes 8 days and costs 2,000,000 gold.  And you soon encounter the next twist: on the later levels, patience is no longer enough.  A maxed-out set of Gold Mines can produce 360,000 gold a day, meaning you could theoretically accumulate the sum neeeded for that Town Hall upgrade in 6 days.  However, you’re being continually raided by other players, and since other players can see your wealth before they choose to attack, a fat bank account means you’re a fat target.  What’s more, since successful raids award percentages of your wealth, a single “three-star” attack worth 25% can see 500,000 gold disappear in a flash. 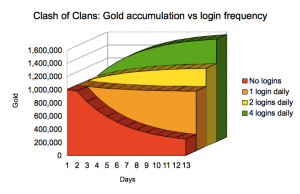 There’s more.  In your typical RTS, collected resources immediately go into your central storage.  In Clash of Clans, though, they stay in the collectors, vulnerable to attack both by location and design (up to 50% can be stolen, vs. 20% for central storage), until you log in to manually transfer them to relative safety with a tap.  This, too, makes it difficult to accumulate large amounts and encourages you to login at least several times a day.  The chart shows why: if you start with 1,000,000 gold in storage, earn 360,000 daily, and get attacked once daily, losing 50% from your collectors and 20% from central storage, the player who doesn’t bother logging in for two weeks will see their pile drop 75% to under 250,000, while the player who logs in religiously four times a day will increase their wealth by over 50% to 1,550,000 — but even their earnings flatline well before two million.

What this means is that, once your bankroll is over 1.5 million or so, the only free way to keep the balance growing is grinding, a tedious non-stop cycle of raiding and army rebuilding, with nervous logins every five minutes to keep raiders at bay (you cannot be attacked while online).  In their grandmotherly kindness, though, Supercell provides you a whole wealth of alternatives.  Can you spot the pattern?

And once you’ve finally earned those 2 million and clicked the “Build” button, it takes another 8 days to build the thing — unless, that is, you fork out another 1123 gems ($11.23) for instant completion.  It’s little wonder most players start “to gem” (it’s a verb in Clash of Clans parlance) by the time they reach Town Hall level 7 or so, the stage when most costs are measured in millions and building virtually anything unassisted takes days.  Jorge Yao, the game’s undisputed champion, figures he has spent north of $2500 in real money on buying gems, and according to back-of-the-envelope calculations, the cost of fully fitting out your virtual village is on the order of $5000 when you include walls.  It’s little wonder the top clans leaderboard is full of players like “>< Royal ><” from Kuwaiti clan “Q8 FORCE” and clan UAE’s “khalifa” (presumably from Bahrain’s ruling House of Khalifa).

Your Pain is Supercell’s Gain

Unsurprisingly, the entire game has been warped in subtle ways to encourage buying and using gems.

For example, in your average real-time strategy game, you have fine-grained control deploying and directing your troops, and units that survive can be used in the next battle.  Not so in Clash of Clans: once deployed, units fight according to their hardcoded strategy (most commonly the harebrained “bash closest building”, regardless of what it is or who is firing at them), and every unit deployed disappears at the end of the battle, even if they are victorious.  This means it’s essential to rebuild huge armies and to attack with massive force every time.   And since building those dragons can take several hours, during which time you’re wide open to attack, there’s another massive inducement to solve the problem with a few gems.

Probably the most blatant case of tilting the table is the recent introduction of “Dark Elixir”, a third in-game resource geared squarely at high-level players.  Collected at the glacially slow pace of 20 units per hour, even in an raidless pacifist world it would take 21 days of waiting to accrue the 10,000 units needed purchase its main selling point, the Barbarian King, and the table is stacked further yet by subjecting collectors to 75% raid losses.  Who wouldn’t pay $6 to skip the tedium and uncertainty?

In comparison, the “clans” of the name seem almost like an afterthought.  Their primary function is to be a gifting circle, where players donate units to others in their clan, and receive units in return.  And that’s it: clan players cannot share gold or elixir, much less gems.  But they do provide another handy lever of extra social pressure to ensure you log in regularly, since clan troops defend your base, die when attacked and can only be received on explicit request, and since most clans enforce minimum per week donations and kick out “freeloaders” who have not paid their dues.

But It Could Be Worse…

Some credit where credit is due: unlike Zynga’s notoriously annoying games, Clash of Clans does not require Facebook signup, cram the game full of ads, spam you and your friends, or pimp your personal information to random third parties.  And while you’ll be reminded that “Hey, you could use gems for this” whenever you try to do something you can’t afford, if you stay within your means and have the patience of an ascetic saint, you’ll never even get asked for money.

At the end of the day, my feelings towards Clash of Clans are distinctly mixed.  Being a penny-pincher whose in-game purchases have been limited to a single $4.99 gem pack, even that largely as a token of appreciation to the game’s makers, I can’t really complain about the hours of entertainment I’ve gotten in exchange.  Yet I still can’t help but cringe as I run into all the ways the game is intentionally crippled to get you to pay up, and the way its Pavlovian triggers to come back for more operate on fear.   Would Minecraft have been any fun if it required you to log in every six hours or you’d lose parts of your inventory?   And how much more awesome would Clash of Clans be if the effort of squeezing every last cent out had been put into improving the game itself instead?