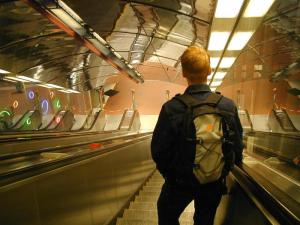 At 18, I spent the summer delivering mail at minimum wage minus 15% (it was “training”, you see), and promptly blew my meager savings on a frenzied one-month Interrail trip through Europe.  When my parents read through the angsty, near-incoherent notes I’d scribbled into a diary while waiting for trains in Holesovice or Ljubljana, complaining about expensive yogurt and Hungarian orthography, they ruffled my hair the same way I now praise our two-year-old for going potty and said “This is amazing!  You should go work for Lonely Planet!”
“Ha”, the cynical teen thought.  “Fat chance of that ever happening.”

Yet 15 years later in Singapore, as I sat warming my hands over the dying embers of Wikitravel Press and glumly contemplated a return to the grim meathook world of telco billing systems, I received an e-mail from Lonely Planet.  A few days later, I took Gus to Komala Vilas for roti pratas, and he outlined the vision for what would become the Shared Publishing Platform and why they could really use a travel wiki kind of geek for it. A few weeks later, I was in the Melbourne suburb of Footscray, staring at the world’s largest accumulation of travel knowledge in the Void and pinching myself: “Holy crap. This is for real, I’m standing inside the HQ of Lonely effing Planet, and these people want me to come work here.”

Now I sit here in equal disbelief, voluntarily saying farewell to the best company and best team I’ve ever had the privilege of working for, and that’s not just the kind of hyperbole expected for these public farewells.  The past three years of replacing a jet’s engines in mid-flight have been an intense learning experience, and the work is nowhere near done, but unlike the company’s three previous attempts, it’s now over the hump.  All authors are now writing directly into the content management system, where editors and curators weave their magic, with printed books, e-books, apps and the website being pumped out the other end, and Lonely Planet can now start fully focusing on its shiny digital future.

And me?  I’m joining Google’s Geo team in Sydney, where I’ll be working with the world’s most popular travel application, Google Maps.
I plan to continue to write this blog, although there will be less idle speculation about what the Big G is up to next and less of a focus on the print publishing business I now depart. That said, my next post ought to give some food for thought to those in the industry, so don’t unsubscribe just yet!