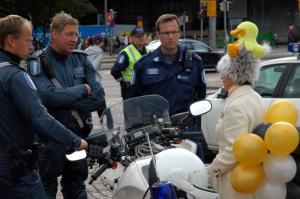 Two more pieces of news in the all-too-long-running Wikitravel-versus-Wikimedia saga.

First, the name of Wikimedia’s new site is now effectively confirmed as Wikivoyage, as the voting has ended with 160 votes in favor of the name, with a feeble 44 for the 2nd highest-rated option.  The English version of the site is already open to the public at http://en.wikivoyage.org and hosting will shortly be transferred to the Wikimedia Foundation.

Second, Internet Brands has filed an opposition to Wikimedia’s motion to dismiss.  This document is even more bizarre than the last one, starting with the claim that their lawsuit is “strictly a dispute among would be business competitors“, which seems to acknowledge that defendants Holliday and Heilman are not even running a business yet!  Internet Brands also claims that they “have used [Internet Brands’] mark … as part of Defendant’s name for the rival website” — but as you may recall, this “rival website” a) doesn’t exist yet, b) did not have a confirmed name when IB filed their opposition, c) shares nothing with Wikitravel but the word “wiki”, and d) has nothing to do with Holliday and Heilman.

The following pages then proceed to perform awkward legal gymnastics with the aim of claiming that their lawsuit is not about the future Wikimedia site, but the defendants’ “one time swing at deceiving” of sending e-mails to Wikitravel users.  No, that argument doesn’t make any sense to me either, but obviously they’re trying to furiously backpedal from getting the Foundation involved and making it seem like their beef is solely against Holliday and Heilman.

But buried at the end of the document, Internet Brands quietly drops the second of their four claims, the Lanham Act charge against the brief use of the term “Wiki Travel Guide” on the Wikimedia discussion page.  This effectively means that the only charges left standing are trademark infringement and unfair competition, which only serves to make the domain name charge earlier is even more incomprehensible.

Holliday’s response is due on October 22, and the first court date is in early November.  Stay tuned!